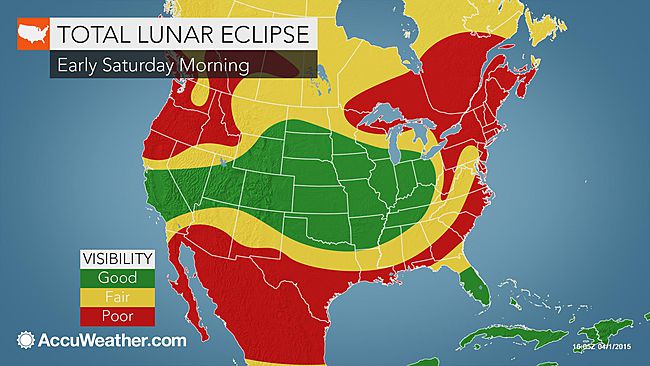 Early Saturday morning, the shortest Total Eclipse of the Moon / Total Lunar Eclipse in the 21st century will be visible, completely, in eastern Australia, eastern Siberia, the Pacific Islands, most of Japan, and most of Alaska.

A Lunar Eclipse or Eclipse of the Moon is when the orbit of the Moon brings our natural satellite into the Earth's shadow, always near the time, and including the time, of a Full Moon.

An Eclipse of the Moon or Lunar Eclipse is the type of eclipse that is safe to watch, directly, with the naked-eye, binoculars, or a telescope. Of course, visibility is dependent on local weather conditions. For areas where sky conditions are poor, as well as in areas where the eclipse will not be visible at all, Internet web-casts of the event will be available (links to these web-casts are listed near the end of this blog post).

Lunar Eclipse Tetrads are sporadic and usually rare. There were no such Tetrads during the 300-year period of 1600 to 1900. However, this is the first of eight Tetrads in the 21st Century! The next Tetrad will begin in April of 2032.

The total phase of the April 4 eclipse, some call it the “Blood Moon” portion, will be the shortest of the 21st century. For less than five minutes, from 7:57:54 a.m. EDT / 11:57:54 UTC to 8:02:37 a.m. EDT / 12:02:37 UTC the Moon will be completely within the Earth's shadow. During this eclipse the Moon skims just inside the edge of the Earth's shadow, rather than passing through the middle of the shadow, as occurs during other Total Lunar Eclipses. This is the reason for this eclipse's brevity in the total phase.

Often, particularly during the middle of a Total Eclipse of the Moon, the Moon will not disappear from view but can be seen with a reddish tint, what some call "blood red." If the Earth had no atmosphere, likely no sunlight would reach the Moon during a Total Lunar Eclipse, and the Moon might seem to disappear.

During the Total Lunar Eclipse, the Full Moon for April occurs at 8:06 a.m. Eastern Daylight Saving Time (EDT) / 12:06 Coordinated Universal Time (UTC). Native Americans knew the April Full Moon as the Pink Moon. This name came from the herb moss pink or wild ground phlox, one of the earliest wildflowers of Spring.

In Earth's Northern Hemisphere, the April Full Moon is also known as the Sprouting Grass Moon, Seed Moon, Goose-Egg Moon, and the Egg Moon. Coastal Indian tribes called it the Fish Moon, as this was the time of year shad swam upstream to spawn.

In the Southern Hemisphere, the April Full Moon is known as the Harvest Moon, Hunter's Moon, and Blood Moon.