Journey to the Sun ! 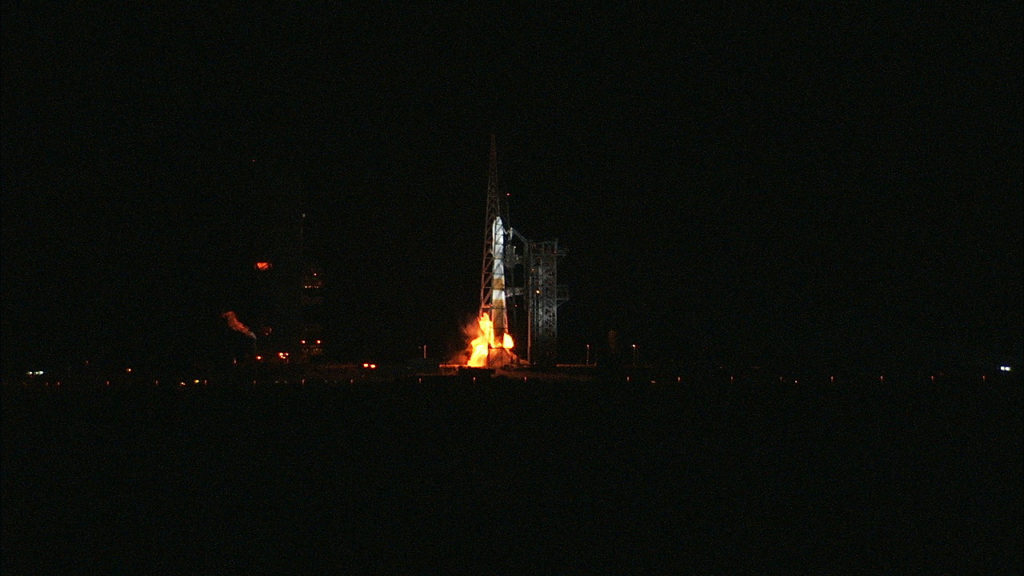 Launch of the Parker Solar Probe on a 3-month journey to the Sun. The on-time launch (although there was a one-day delay) occurred from Space Launch Complex 37 at the Cape Canaveral Air Force Station in Florida early on Sunday Morning, 2018 August 12. (Image Source: NASA)

Early Sun-day morning (ironically, before local Sun-rise on August 12), NASA launched a mission to the nearest star, our Sun. The Parker Solar Probe will enter and study the solar corona, the Sun's atmosphere, when it arrives in November, for the beginning of a 7-year mission, orbiting the Sun 24 times.

It was just on August 21 of last year, during the Great American Solar Eclipse, that millions of Americans saw the solar corona, safely, with their own eyes. The first data about the Sun, from the Parker Solar Probe, should start arriving in December.

After nearly a 24-hour delay from the original launch time, the Parker Solar Probe was launched, on-time, from Space Launch Complex 37 at the Cape Canaveral Air Force Station in Florida. The early Sunday morning (2018 August 12) darkness was disrupted at 3:31:56 a.m. Eastern Daylight Saving Time (EDT) / 7:31:56 Coordinated Universal Time (UTC) when the 1,400-pound / 635.029318 kilogram probe, about the size of a small automobile, lifted-off.

“That’s a relatively light spacecraft,” said Andy Driesman, Project Manager for the mission at the Johns Hopkins University Applied Physics Lab in Laurel, Maryland. “And it needs to be, because it takes an immense amount of energy to get to our final orbit around the Sun.”

Being launched on one of the most powerful rockets in the world, a United Launch Alliance Delta IV Heavy Rocket (with a rocket third-stage), this rocket has 55 times more energy than is required to reach Mars! About two hours after launch, at 5:33 a.m. EDT / 9:33 UTC, the mission operations manager reported that the spacecraft was healthy and operating normally.

It takes a lot of fuel to place even a fairly light-weight object into Outer Space. By about a minute or-so after launch, the entire rocket was half the weight it was at the time of launch! The fuel consumed in the launch constitutes the rocket's lost weight.

The first time NASA has ever named a space mission after a living person, the Parker Solar Probe is named after American astrophysicist Dr. Eugene Parker, the S Chandrasekhar Distinguished Service Professor Emeritus, Department of Astronomy and Astrophysics at the University of Chicago. Now age 91, Dr. Parker viewed the launch at Cape Canaveral this morning.

It was 60 years ago near the beginning of the Space Age, in 1958 at about the same time that NASA was officially established, that Dr. Parker published an academic paper which developed the theory of the solar wind, the stream of charged particles and magnetic fields that flow continuously from the Sun, after observing that as a comet approaches the Sun the comet's tail always points away from the Sun. He also predicted the “Parker Spiral” shape of the solar magnetic field extending into the Outer Solar System.

This project has literally been in the planning for the last 60 years, since the publication of Dr. Parker's academic paper. Only now have we been able to develop the technologies that will allow the Parker Solar Probe to travel close to the Sun, safely.

“NASA was planning to send a mission to the solar corona for decades, however,
we did not have the technology that could protect a spacecraft and its instruments from the heat,” said Adam Szabo, the Mission Scientist for the Parker Solar Probe at NASA’s Goddard Space Flight Center in Greenbelt, Maryland. “Recent advances in materials science gave us the material to fashion a heat shield in front of the spacecraft not only to withstand the extreme heat of the Sun, but to remain cool on the backside.”

The most important technology developed was the shadow heat shield, made of a reinforced carbon-carbon composite. This will protect the scientific instruments from the solar corona's intense heat and radiation. While the Sun-facing side simmers at +2,500 degrees Fahrenheit / +1,371.11 degrees Celsius, behind the shield the spacecraft will be a cozy +85 degrees Fahrenheit / +29.44 degrees Celsius.

NASA Parker Solar Probe Project Scientist Nicky Fox, with the Johns Hopkins University Applied Physics Lab, describes the probe as "the most autonomous. spacecraft that has ever flown." She goes on to say, “We’ll be going where no spacecraft has dared go before — within the corona of a star...With each orbit, we’ll be seeing new regions of the Sun’s atmosphere and learning things about stellar mechanics that we’ve wanted to explore for decades.”

Greater spacecraft autonomy is necessary because much of the time, particularly when the spacecraft is on the other side of the Sun from Earth, the probe will be out of communication with Earth scientists, due to the great amount of radio noise that comes from the Sun. And, even when the probe is within communication range, it will take eight and one-third minutes to send a command to the spacecraft, as it takes light eight and one-third minutes to travel from the Sun to the Earth.

In fact, the probe will orbit Venus seven times before it reaches the final, quite eccentric solar orbit. Actually, all of the probe's orbits will be highly elliptical, to reduce the amount of time the probe's scientific instruments and electrical systems have to be exposed to the spacecraft charging effects, highly-charged particles, radiation, and heat from the near-solar environment. And, at closest approach to the Sun at a distance of only 3.83 million statute miles / 6.16378752 million kilometers, this will be the closest any human-made object has gotten to our Sun!

Although the probe will orbit Venus seven times, as it perfects its solar orbit, only one passage of Venus will permit data about Venus to be collected and sent back to scientists on Earth. On the other six passages of Venus, the scientific instruments will be off, to allow the spacecraft's limited power to transmit solar data back to Earth.

On the closest orbit to the Sun, the Parker Solar Probe will be traveling 430,000 miles per hour / 692,017.92 kilometers per hour, becoming the fastest human-made object ever built! At this speed, the probe would take but one second to travel from Philadelphia to Washington, DC !

There are three primary goals of this mission:

In particular, scientists want to learn more about how the Sun affects Space Weather, that is the extreme events in the solar corona which send-out highly-charged particles and radiation that often affects electrical systems on Earth and in Earth orbit. The gases and plasma in the Sun create strong magnetic fields, which often become twisted due to the uneven rotation of the Sun, creating sunspots, solar flares, and coronal mass ejections. The particles and radiation sent-out by these explosive events can effect radio communications, GPS, and satellites, disrupt electrical grids, and endanger astronauts.

“All of our data on the corona so far have been remote,” said Nicholeen Viall, Solar Physicist at NASA's Goddard Space Flight Center. “We have been very creative to get as much as we can out of our data, but there is nothing like actually sticking a probe in the corona to see what’s happening there.”

Below the probe's high-gain antenna is a plaque which dedicates the mission to Dr. Parker and includes a quote from the scientist: “Let’s see what lies ahead.” The plaque has a memory-card, which includes the names of over 1.1 million people; NASA solicited these names from interested members of the general public. The memory-card also includes photographs of Dr. Parker, along with a copy of his 1958 scientific paper.


Source: Glenn A. Walsh Reporting for SpaceWatchtower, a project of Friends of the Zeiss.
Sunday, 2018 August 12.